Winter is in retreat. The snow is gone from the lower elevations and receding slowly, but surely, from the colder areas at higher elevations and on north-facing slopes. I enjoy following the natural events associated with this transitional time and the advance of spring. Animal behavior is especially fascinating.

The Groundhog (Woodchuck), having lived off fat reserves while hibernating in its burrow for six months at a near-death metabolic rate, is ready for a change of scenery and a good meal. However, some are in for a surprise when they emerge, finding snow-covered fields rather than fresh greens.

Groundhog on the 27th of March

Waterfowl, particularly Mallards, dabble in cut corn fields flooded with water from melting snow, finding something to eat between the rows of stubble. 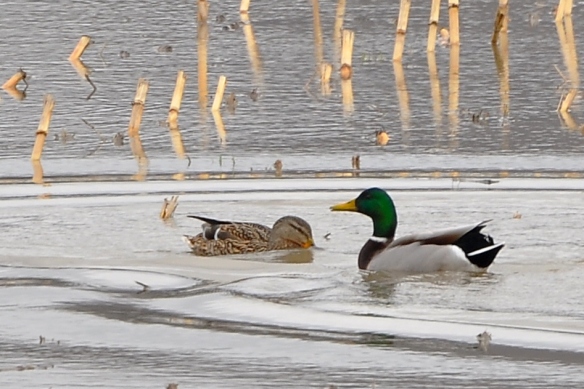 Hen and drake Mallard feeding in a flooded field 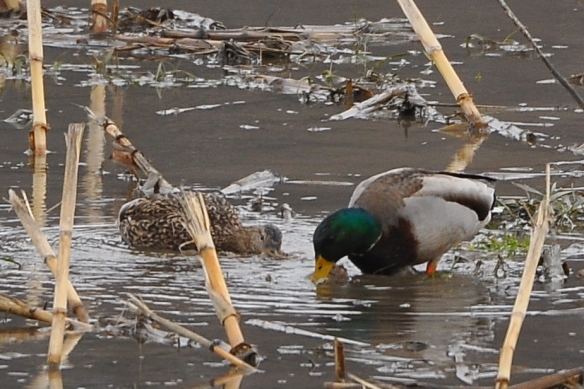 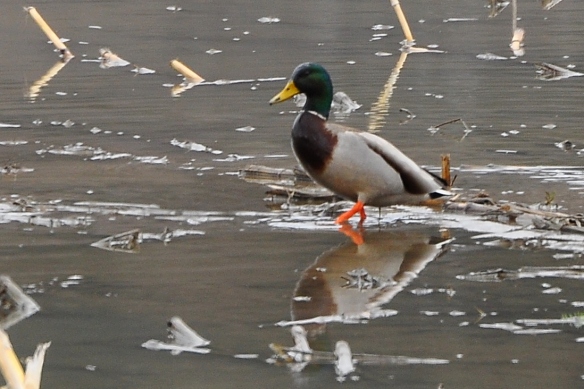 For months, whitetails have subsisted largely on woody browse such as the twigs of apple, ash, and Red-osier Dogwood. If available, the evergreen foliage of hemlock and Northern White-cedar was also consumed . Having exhausted most of this food supply, in many instances over-browsing it and damaging the plants, they’re searching snow-free fields for a dietary shift that includes emerging weeds and grasses. Hungry deer are feeding throughout the day, just about anywhere that nutritious, herbaceous food is available. Overall, the deer in this locale appear to be in fairly good condition, although some of the young deer, last year’s fawns, look gaunt. 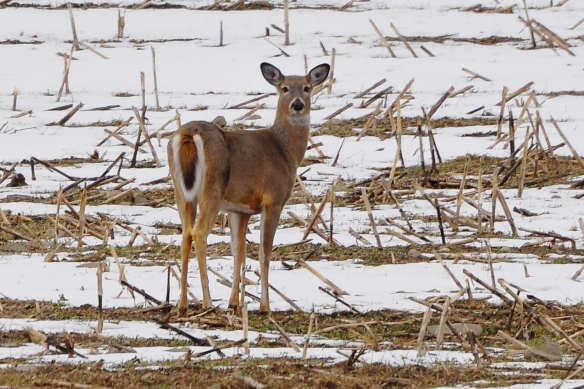 Perhaps the most notable harbinger of spring and the changing seasons is the Red-winged Blackbird. They arrive in early to mid-March, usually in noisy winter flocks that are easily seen and heard. One such flock, about 30 birds, arrived here in mid-March. Throughout the day they repeatedly swooped into the feeders, fed briefly, then burst into flight and settled in the large, mature oak and maple trees nearby. 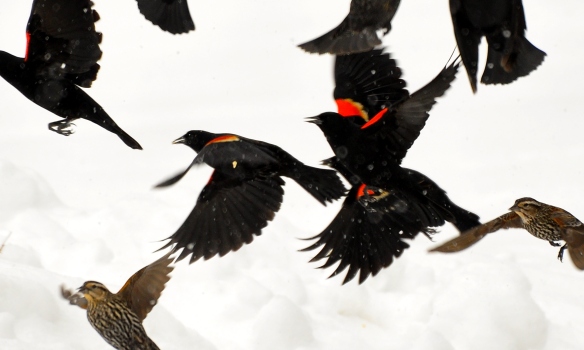 Part of a small flock of two dozen Red-wings, bursting into flight after feeding

When feeding socially, males on the ground show just the white or yellow edge of their shoulder patches. However, the red shoulder patches typically displayed by males in the breeding season are visible in flight.

Male Red-wings feeding, with their red shoulder plumage hidden except for the bird in flight

The females are entirely different (sexual dimorphism) – mostly brown with pronounced streaking and a light cream or pale orange throat.

When the snow and stormy weather subsided, the backyard flock dwindled in size. The birds moved on to traditional feeding grounds and to establish breeding territories (they may continue to feed in flocks during the breeding season). I’ll continue to see a few birds at the feeders, but the more common sighting at this time is that of a territorial male, perched on a cattail stalk or other low vegetation in marshes, fields, roadside ditches and other suitable habitat, doing everything possible to attract females (as many as possible) and defend its breeding territory..

When defending territories, the males are conspicuous in color and voice. Their bright red shoulder patches are in full display during the breeding season, serving to establish dominance and attract mates. 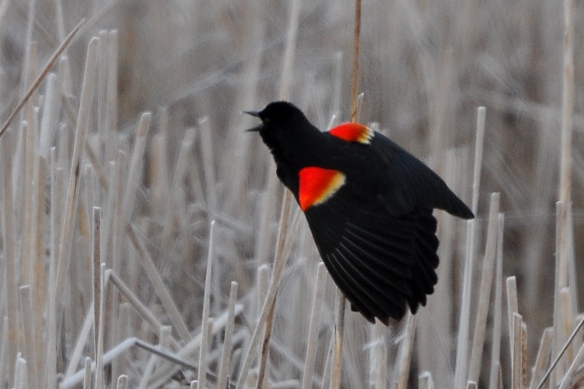 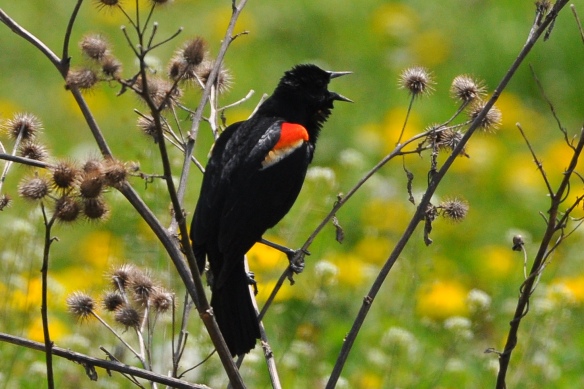 A male Red-wing in early May, singing in the brush at the edge of an uncultivated field

All photos by NB Hunter

4 thoughts on “Signs of Spring”