Small flocks of Slate-colored Juncos are an integral part of the winter landscape, especially around backyard feeders. They’re often the first to arrive at a feeder in the morning – when there’s just enough light to see breakfast!

We have less sun than Portland and more snow than Buffalo. So, when a nice January day arrives, I work it. The golden hours at either end of the day are certainly magical, but the winter sun is low in the southern sky throughout the day, and the 9 AM – 3 PM brightness allows me to operate within the sweet spots of my camera and lens when photographing wildlife. The Black-capped Chickadees are fond of the mid-day sun as well! 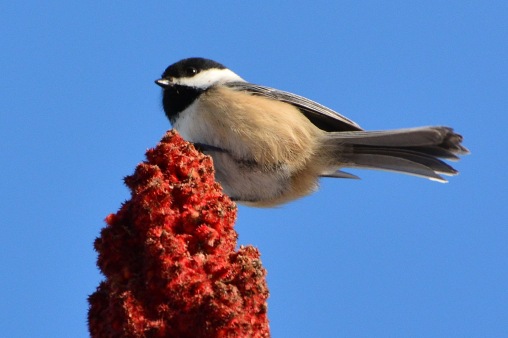 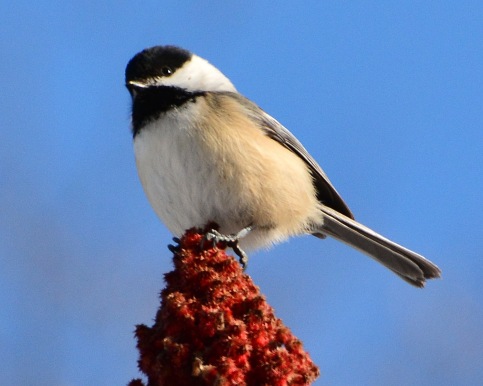 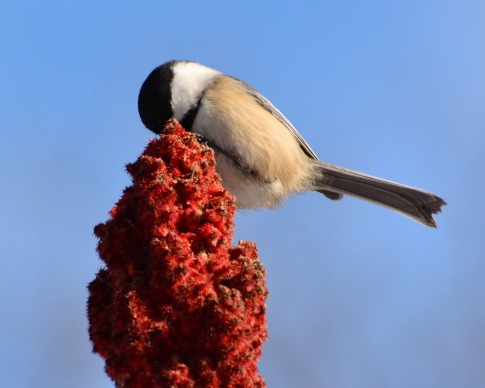 The regional weather report often forecasts “lower temperatures and more snow at higher elevations to the south and east”. That would be us. However, this morning was an exception: a beautiful, heavy layer of frost rather than snow. I headed for the hills to soak it all in. 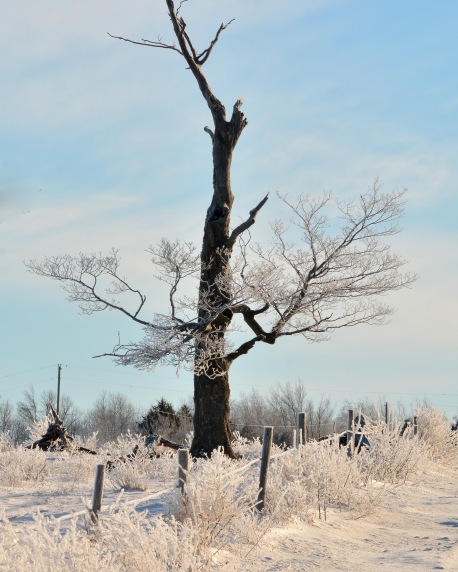 I had a chance encounter with a Coyote on January 17,  a week after a controversial wildlife hunting (predator killing) contest took place. The day after I processed my coyote photo, there were pictures in the local papers of piles of dead predators, mostly foxes. These contests occur statewide and appear to be rooted in the rapid increase in the coyote population in New York State. My training is in natural resources ecology and management; I hunt; I’m an advocate of scientific management (best management practices) of natural resources, including harvest. I also believe that the harvest of wildlife must be carried out in a thoughtful, responsible manner, with great respect for the animals involved. A contest with assigned point values for species, culminating in prize money and publicity, is a reversal of over a hundred years of blood, sweat and tears in the conservation movement. Many feel as I do, and legislation has been introduced into the state Assembly to prohibit events like this.

Adult Eastern Coyote; hunting for mice and voles on an abandoned farm (just prior to the photo its head was buried in the hole in the snow near its back legs) 17Jan15

In “Rise of the Eastern Coyote” (NYS Conservationist magazine, June, 2014), Dan Bogan, Ph.D., presents a very interesting and informative summary of the history and status of the coyote in New York State. Since arriving here from Canada in the late 1930s, coyotes have rapidly acclimated to human environments and filled the niche once occupied by the Gray Wolf (extinct in New York State for over 100 years). According to Bogan, these new canids are unique predators: about 64% western coyote, 26% wolf and 10% domestic dog. From an ecological point of view, this is exciting! We have a rare opportunity to study, first-hand, the evolution of a new species or subspecies and the rapid expansion of a population of large predators into a man-made world. .

Adult Eastern Coyote, as above

However, pure flocks are the exception rather than the rule. Many of our gregarious winter visitors from the far north – Snow Buntings, Common Redpolls, Lapland Longspurs, Horned Larks – commonly occur in mixed flocks. I discovered this several years ago when Redpolls appeared in my cropped images of a flock of Snow Buntings.

Close examination of the images from my recent encounters with Snow Buntings revealed at least one additional species in the mix: Horned Larks.

Snow Buntings and ? arriving at a feeding site

One of my favorite mid-winter scenes is a large flock of small, mostly white songbirds flying in tight formation over a weedy, snow-covered field. Their undulating, swirling flight, highlighted with a sprinkling of sunlight, is an amazing and beautiful sight.

These are Snow Buntings on the southern portion of their winter range. Like Snowy Owls, they summer and breed in the Arctic and occupy open fields in the northern U.S. and Canada in winter. Weed seeds and waste grain sustain them at this time of year. 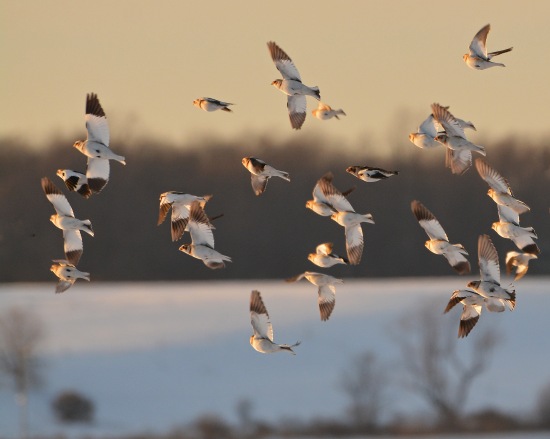 When I stumble into a mature Winterberry Holly (Ilex verticillata; female plant) on a gray winter day, the reason for its popularity is obvious, even at a distance. The tightly grouped clusters of persistent red berries (drupes) brighten an otherwise dull, monochromatic landscape. The fruit of this native shrub, valued by Native Americans for medicinal purposes and eaten by many species of birds, also appears in cultivated landscapes throughout Eastern North America. 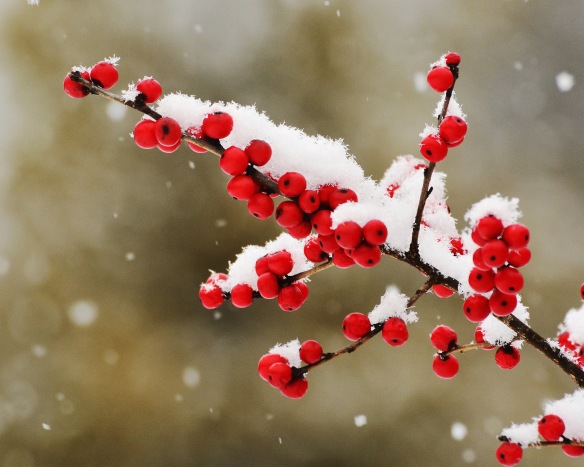 Winterberry Holly in a snowstorm 1/12/15

I was on the road early this morning, lured by sunlight, a partially clear sky, and the dream of another encounter with a Snowy Owl. I couldn’t find an owl to save my life and shifted to Plan B: become a generalist, an opportunistic predator, and try to capture anything of interest within my field of view!.

Round hay bales and drifted snow

Mild relief from the frigid, overcast winter weather arrived this morning in the form of sun and a clear sky. I decided to search for a Snowy Owl by scanning open, agricultural areas at high elevations. Snow depth is well below normal and the fields not completely covered – ideal conditions for finding a large white raptor. Unfortunately, the temperature was also below normal and I was forced to use my heated truck as a blind (hide).  I cheated: functioning in a wind-chilled environment of minus 20 degrees F (-29 C) is a major complication and I wasn’t up to the challenge.

Initially, I found nothing, and grew weary of scanning. After a while, every snow-covered mound of dirt and clump of vegetation in every field can look like a Snowy Owl! 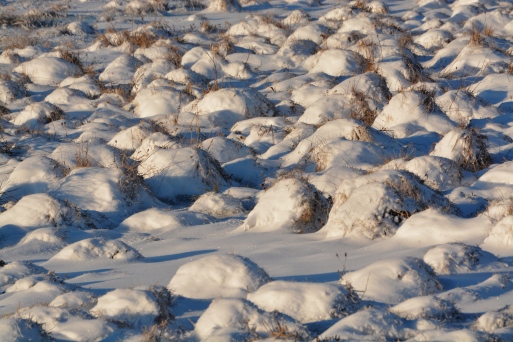 Just as I was about to abandon the search, an owl appeared, and he was hunting the corn stubble!

A small rodent, probably a Meadow Vole, was captured in a weedy patch at the edge of the corn field, near an access gate; distance and obstructions prevented a photograph.

Several years ago, while walking through a mature stand of Norway Spruce trees at dusk, I startled a large bird of prey with a kill. The bird was less than 10 meters in front of me, on a dead limb about 3 meters high. Even though it was nearly dark, I could see that it was a Great Horned Owl and also saw its large, dark-bodied kill plop to the ground as it made a hasty escape. The victim was a crow, and it had been decapitated.

The fact that owls eat crows is at least a partial explanation for the mobbing behavior of crows. Pity the roosting owl (or hawk) that is discovered by a flock of crows. The raucous harassment can be heard for hundreds of meters and is relentless, continuing until the raptor takes flight and is driven away.

On two occasions I’ve had the good fortune to see the interaction between a Snowy Owl and mobbing crows in daylight: last winter (“Mobbed” https://nicksnaturepics.wordpress.com/wp-admin/post.php?post=2038&action=edit) and again three days ago. 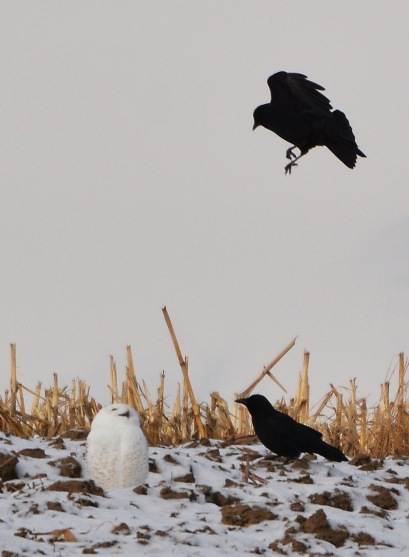 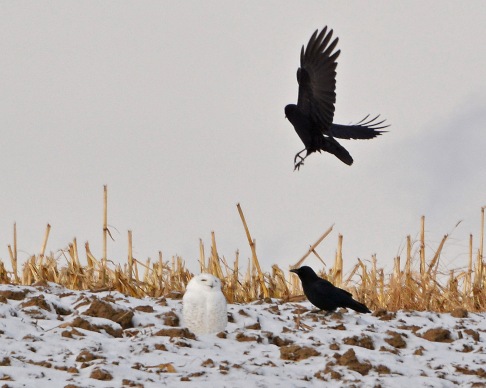 The reaction of crows to a white owl perched on the ground seems to be much less intense than expected, possibly because this is such an unusual and seldom seen raptor. These crows were fairly quiet and, after a feeble attempt to intimidate the Snowy, simply flew away. The owl appeared to be somewhat annoyed, but not alarmed; it never budged.