Late July in Central New York is usually hot and dry and this year is no exception. Water levels in wetlands and surface waters are at a seasonal low, exposing habitats and life processes not visible at other times.

Dragonflies like this male Widow Skimmer are extremely active, foraging on the wing for tiny insects.

Avian predators – shorebirds, herons and kingfishers – capitalize on the availability of prey in exposed mud flats and shallow waters. 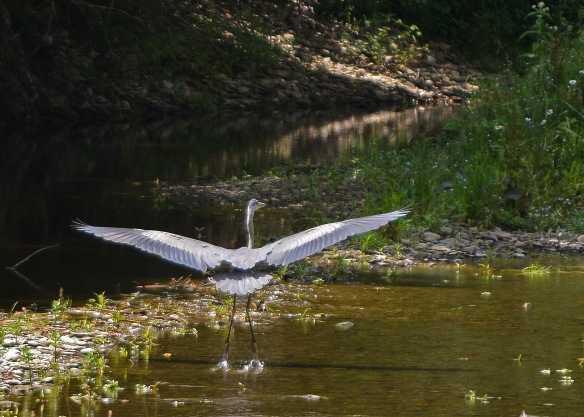 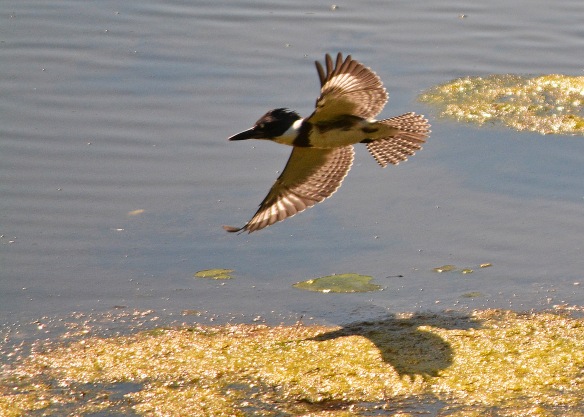 Another avian predator can be seen hunting for prey above the water’s surface rather than below it. Clouds of tiny mayflies (“Tricos”, short for the genus Tricorythodes), pulsating over the riffles of cool, alkaline streams, are fair game for small flocks of Cedar Waxwings.

A “Trico” trapped in a spider web during the morning hatch; the Trico body is 3-4 mm long 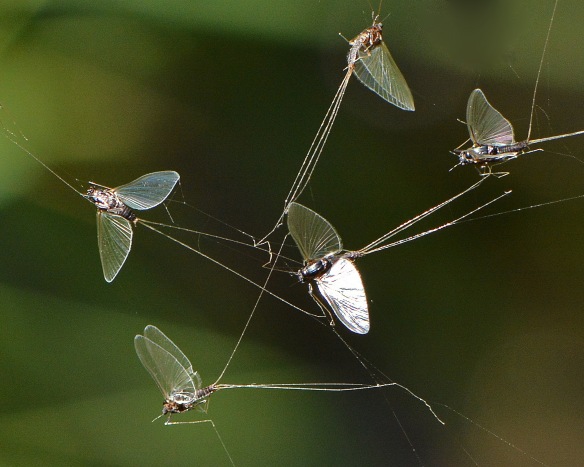 Tricos in a web 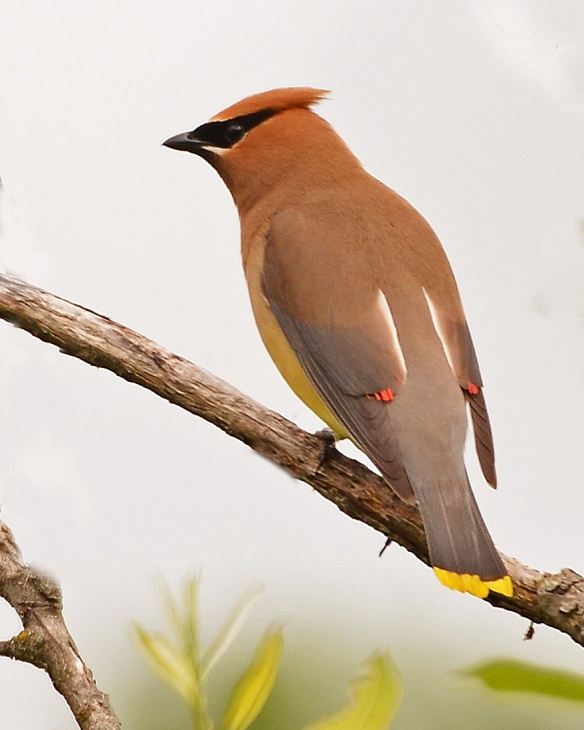 “For many of us, water simply flows from a faucet, and we think little about it beyond the point of contact. We have lost a sense of respect for the wild river, for the complex workings of a wetland, for the intricate web of life that water supports.”   – Sandra Postel

It seems to be much too hot to do this but in the world of White-tailed Deer life goes on; business as usual. I’m sitting in a fence row, my back to a large old Sugar Maple tree. A strip of camouflage burlap draped over a line of parachute cord provides cover. I’m downwind of a huge dairy farm and the powerful aroma of liquid cow manure masks my scent. In this setting, my only predatory weakness is the annoying click of the shutter of my camera. On a quiet evening, with deer in close, it sounds like a chainsaw.

I’m watching a field of cut hay, hoping to see deer and other wildlife; would love to have a close encounter with a fox or coyote. 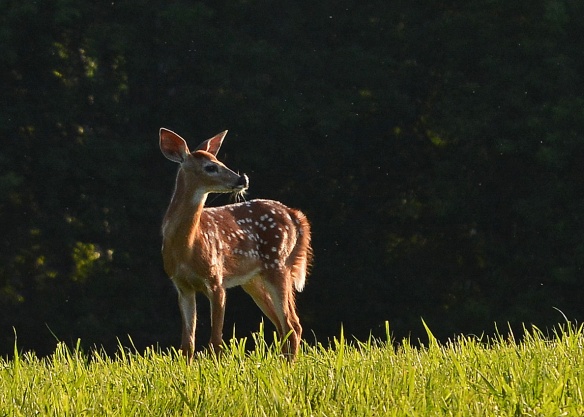 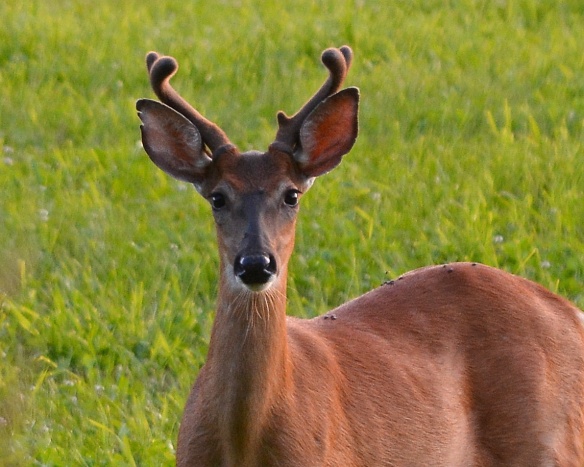 It seemed fitting that, on the eve of the anniversary of the passing of a great friend and naturalist, I was surprised this morning by an immature eagle feeding on something in a hay field. Mobbing crows forced it to fly, too quickly for me to adjust camera settings. When I finally locked on to the eagle, the distance was alarming – too far away for a quality shot, twice my threshold shooting distance. I offer just the image, with no explanation. This was a good day.

I follow the bloom of a group of wild swamp roses along the edge of a swamp. They appear to be thriving in several inches of water and muck, their feet wet year-round; an incredible display of site adaptation and tolerance.

Bees swarm the blossoms, presenting a target-rich environment for my favorite Arachnid: the Flower Spider. Also called Goldenrod Spider or Crab Spider, they’re an impressive ambush predator with a deadly toxin that immobilizes prey instantly. Bees are common prey, but I’ve photographed Flower Spiders with kills as large as the Tiger Swallowtail butterfly and Hummingbird Moth (Clearwing) in their grasp!

Wildlife watching is a global sport and ecotourism a major industry. At the local level, in a region where agriculture, deer and an extensive network of trails and secondary roads dominate the landscape,  deer watching is as much a part of summer as strawberries and sweet corn.

A friend has been seeing does, fawns and bucks on his dairy farm and suggested I set up for photographs. I obliged, telling him it would be a difficult chore, but somebody had to do it. Actually, I was thrilled! It was my first opportunity to  see and photograph triplets, perhaps a once-in-a-lifetime opportunity. 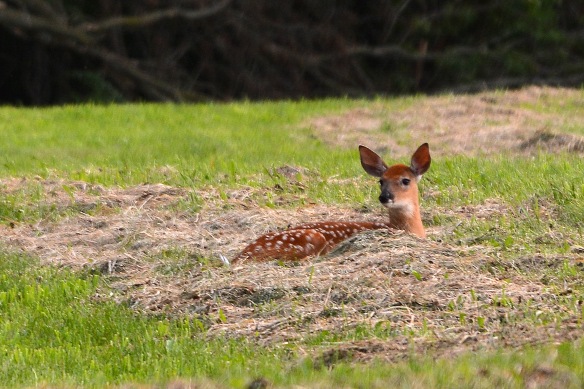 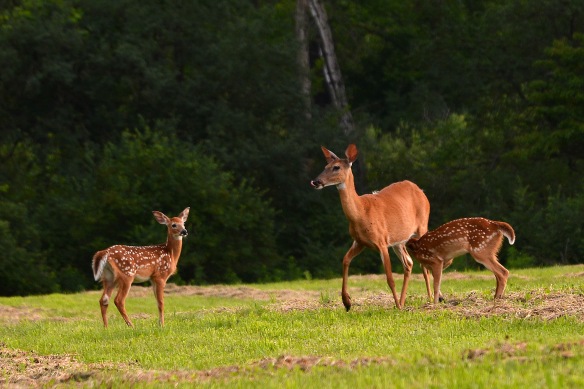 Triplets two and three; mother has my scent and is nervous 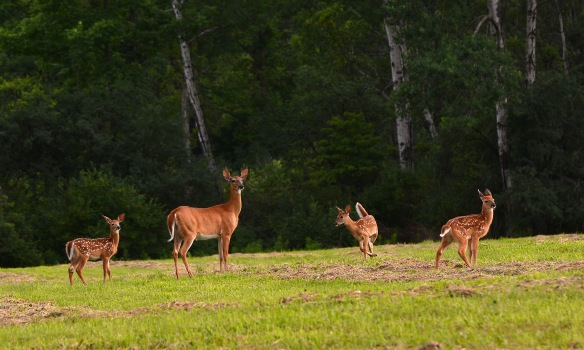 Family portrait, just before mom ran off into the swamp, kids in tow

This doe and fawn appeared an hour later. Highway mortality, long winters and coyote predation take their toll on fawns. One or two fawns per mature doe is the norm, although sightings of mature does with no fawns at all are not unusual. 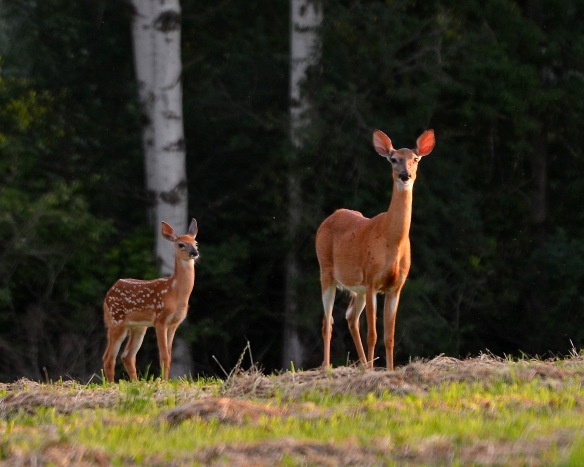 “We do not remember days, we remember moments” – Cesare Pavese

Fertile, slow-moving waters tend to be unsightly and uninviting in summer. Annual accumulation of nutrient-rich sediments and leachates (agricultural runoff and septic systems respectively) creates eutrophic conditions that support dense mats of aquatic vegetation above and below the surface. On larger surface waters large weed harvesting machines must actually be employed to maintain access for recreational uses.

First impressions of a scene like this canal waterway, its surface covered with duckweed, can also be misleading. Sometimes it’s best to lace up your boots, grab some gear and investigate before passing judgement. 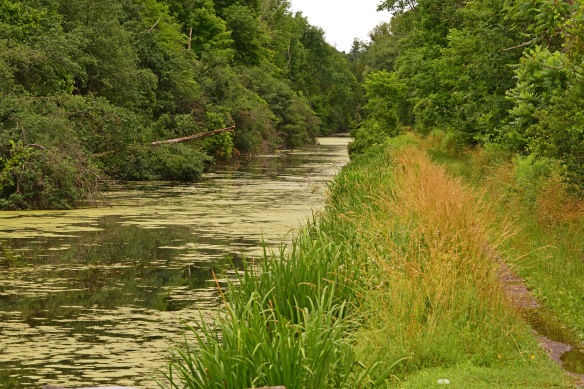 A school of small fish find shelter under duckweed.

A muskrat sits on a small log in the middle of the canal, literally gulping duckweed by the handful.

The muskrat eventually disappeared in thick vegetation at water’s edge. When I stood up to resume my walk, I realized I wasn’t alone on the towpath. A doe and fawn, 70 meters ahead, had their eye on me.

Green Herons forage along the edge of the canal, usually concealed by dense riparian vegetation. I suspect this one was hunting frogs before I unknowingly disturbed it, forcing flight to a perch on the far side of the water to get a better look at the threat. 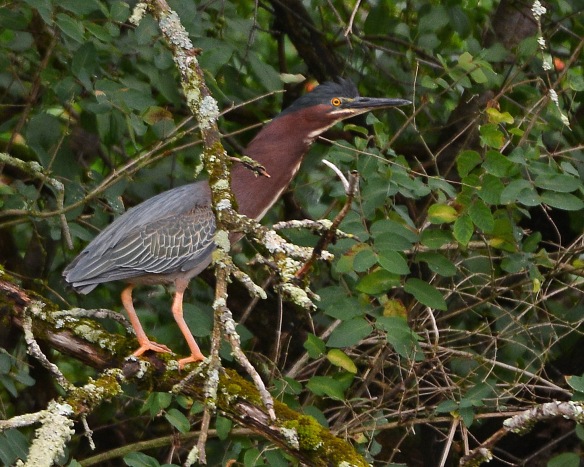 The Fragrant Water Lily: so common, but too photogenic to pass up. 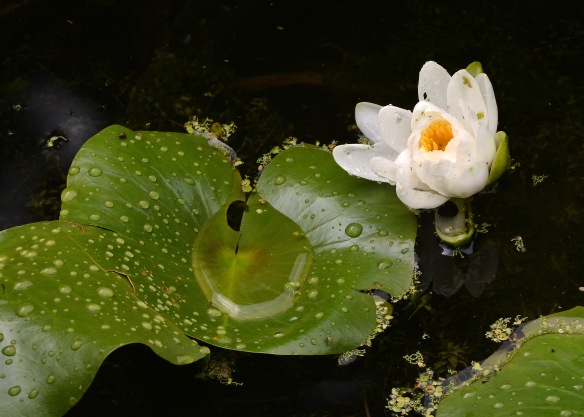 One drawback to linear trails is the return trip – retracing a familiar, and disturbed, corridor. This morning proved to be an exception. I had no sooner turned around to walk back to my truck when I heard a sound 70 or 80 meters ahead; a sound best described as someone heaving a 30 pound rock into the canal. In fact, my first reaction was to scan the trail for people. Nothing. No one around. Then I heard it again, then again. Getting closer: a beaver was drifting downstream, in my direction, signaling danger by slapping its broad, flat tail  against the surface of the water. 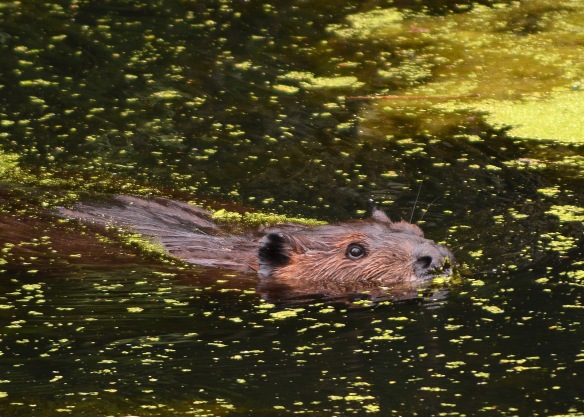 I’ve been “tail slapped” by beavers many times, usually in late evening while fishing too close to a lodge or bank den. I don’t have the words to describe that experience, the booming explosion, in fading light and completely unexpected, but I can say it is an honest test of the strength of your heart and cardiovascular system. This image, the middle one in a 5 shot sequence, shows the full scope of a violent tail slap; the camera captured an experience that I had never actually seen, or appreciated, in full.

“When we try to pick out anything by itself, we find it hitched to everything else in the universe.”   – John Muir

Small flocks of goldfinches are everywhere this year – backyard feeders, weedy fields, forest edges. I have plenty of images of them through the seasons and was thinking of just about everything but goldfinches on my way to the marsh. I had no desire to see or photograph them!

That mindset changed abruptly when I noticed a small flock doing something that I’d never seen before: foraging on cattail flowers – the male flowers. Cattails, a dominant perennial in marsh habitats, flower on a long, terminal spike with staminate flowers above (yellowish when ripe with pollen) and velvety brown pistillate flowers below (the latter will yield 200 – 300 seeds when mature).