In early April the skim of ice on a shallow, ephemeral pool finally melted. The next day, an inviting afternoon sun led me back to the pool, camera in hand. This is a ritual of Spring that’s been repeated since I created the micro-habitat in a wetland 30 years ago. Less than 15 feet across and about a foot deep, the “pothole” is a breeding habitat for dozens of wood frogs. A subsurface layer of clay retains water in Spring and early Summer – in most years, sufficient time for the metamorphosis of tadpoles to frogs.

Built for the cold, the Wood Frog (Lithobates (Rana) sylvatica) ranges far north into Canada and Alaska – farther north than any other reptile or amphibian. Their adaptation to the severe cold and erratic Spring weather of northern climes is unique. They’re freeze tolerant and breed explosively in a narrow window of opportunity. This story – starting with the appearance of more than 30 active frogs and ending with masses of eggs (and no frogs) – occurred in about three days.

The majority of the frogs were males, distinguished by their dark, mottled brown coloration and size (smaller than females; about two inches long). 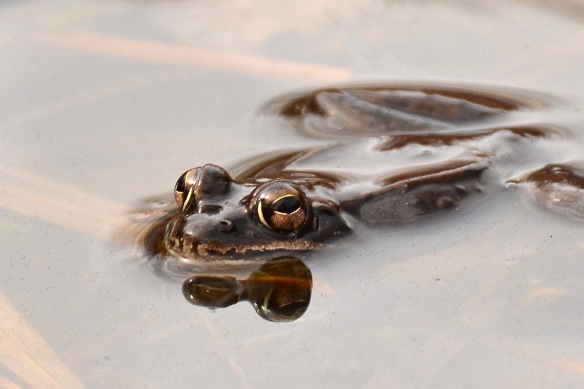 The small size of the vernal pool and a predominantly male population led to frenzied chasing and breeding activity. At times, the water boiled with chaotic activity as a large number of males chased and converged on a female. 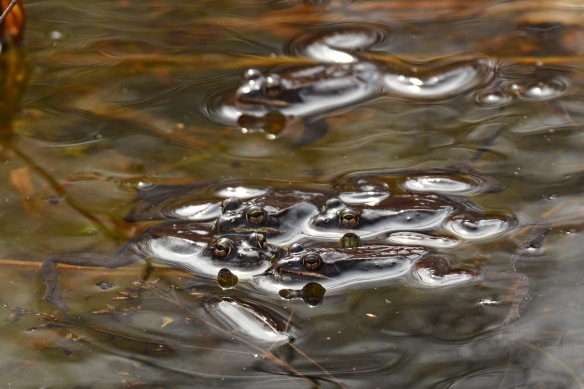 Occasionally, the female, larger and more colorful than the males, could be seen at the center of the fray. 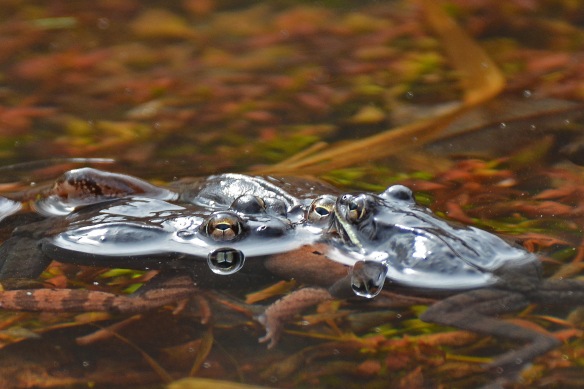 A breeding male grabs the female, hooks his thumbs around her (amplexus) and holds on until eggs are deposited. 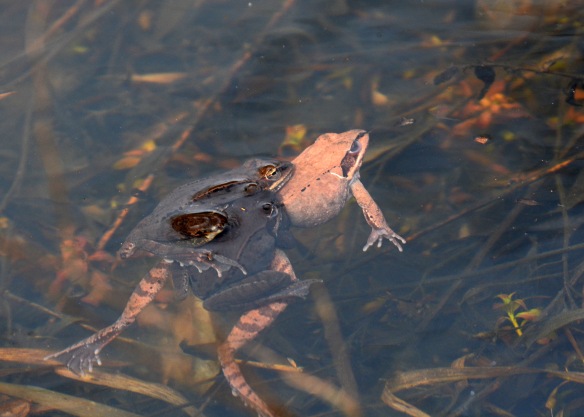 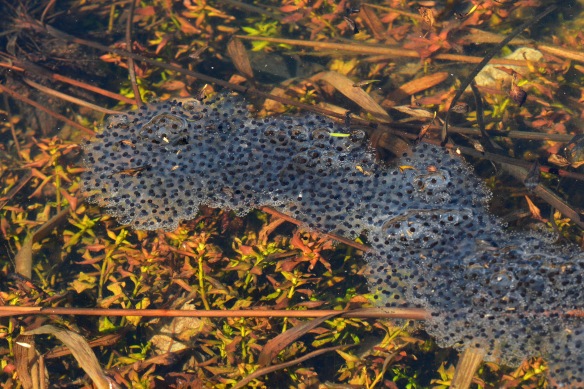 Most offspring that survive a year – relatively few – will return to this natal pool to breed. I’ll be ready, with a slightly larger and enhanced wetland stage for their performance.

Wood frogs are fairly common in forested wetland habitats, but we must be mindful of their complex habitat needs and practice wetland conservation on a broad, landscape level. The conservation of small, temporary wetlands and vernal pools is critical. They aren’t protected and often fall victim to leveling and grading, heavy equipment operation, development and other destructive practices. Additionally, wood frogs are woodland creatures that rely on a variety of habitats (more so than most frogs). They wander far and wide in moist woodland habitats adjacent to their natal pools and also hibernate on land – under leaf litter, rotting logs, rocks, etc. Forest management practices should take this into account.

13 thoughts on “The Amazing Wood Frog”