In recent years milkweed has received much attention as habitat for dwindling populations of monarch butterflies. Most of the more than 100 species in the Americas are tropical, but one species in particular is a staple of monarchs in the North: Common Milkweed (Asclepias syriaca).

My backyard milkweed project started in 2015 with a few transplants from a nonproductive, roadside location. Establishment was slow, but they’re now flourishing. Vegetative reproduction by root sprouts has created a colony of about 30 stems and the large, fragrant flower clusters are insect magnets (according to the US Forest Service, over 450 insects are known to feed on some part of the plant, including flower nectar). I focused on the Lepidoptera, attempting to document the variety of butterflies and moths that benefit from flowering milkweed. Multiple benefits from a single management action is a best-case scenario. The value added from a colony of milkweed is much greater than monarch habitat.

I’ve observed 9 or 10 species of butterflies and moths thus far, as well as countless bees, flies and other insects. This is a sample! 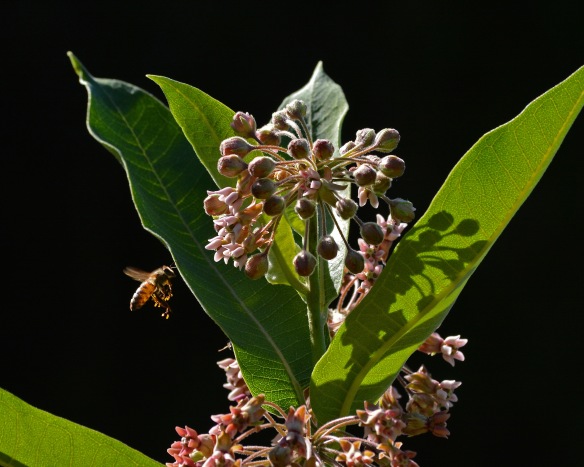 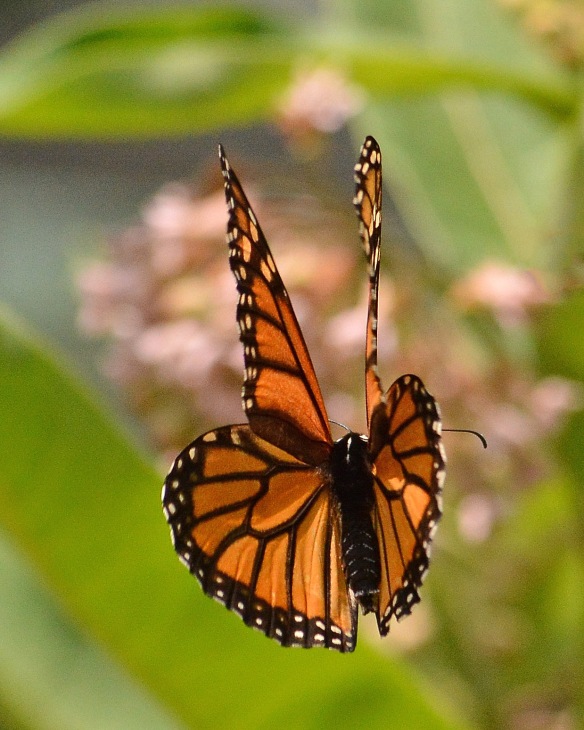 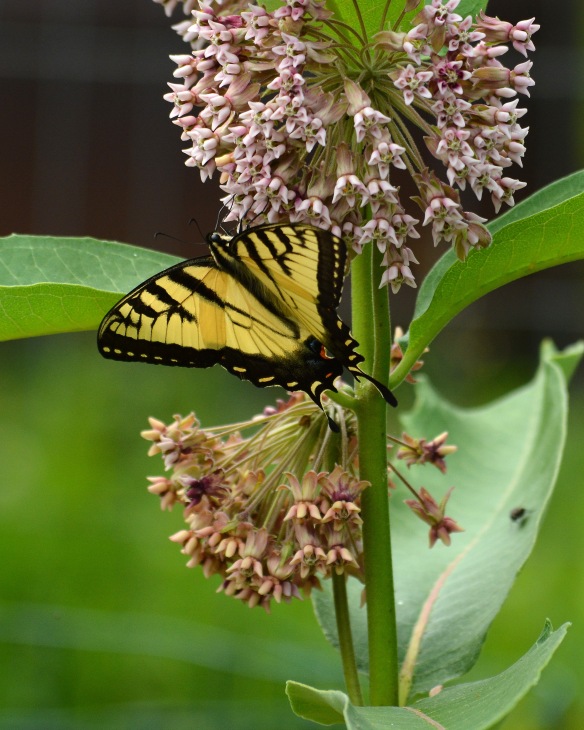 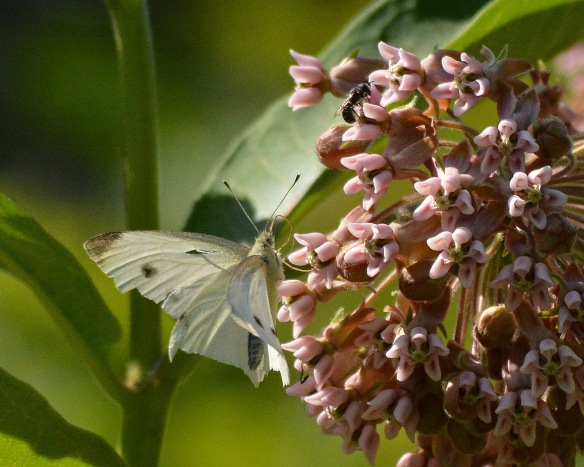 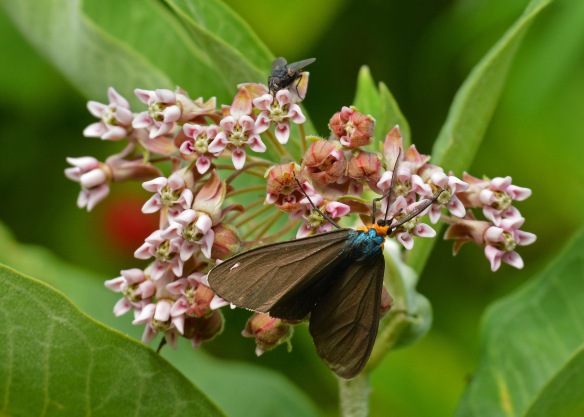 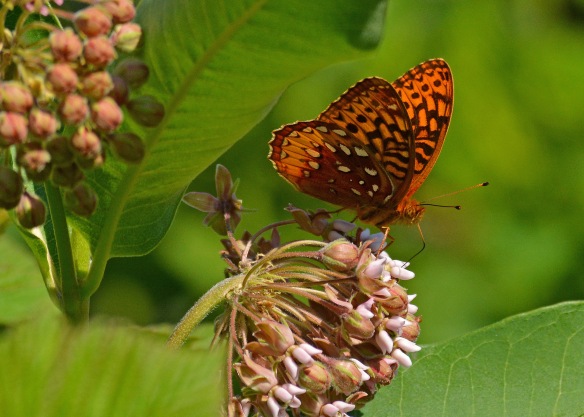 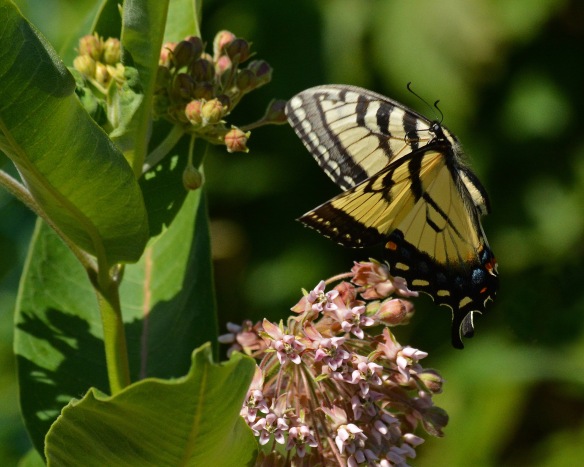 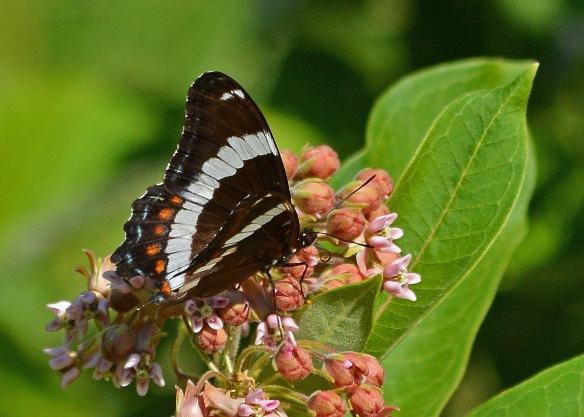 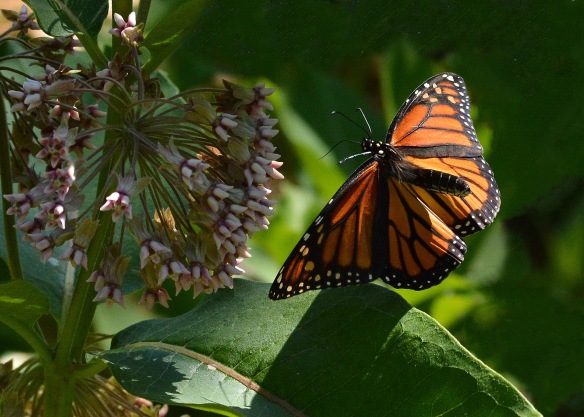 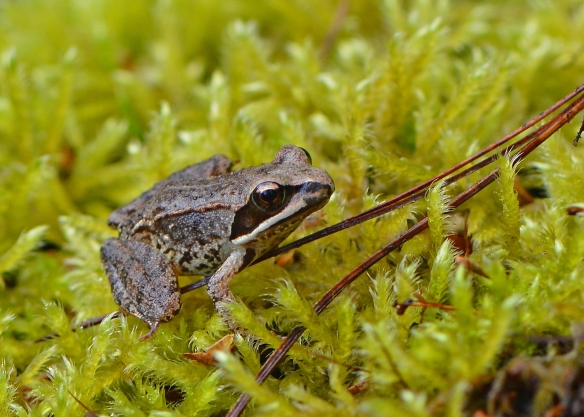 Sub-adult Wood Frog out and about on a rainy day 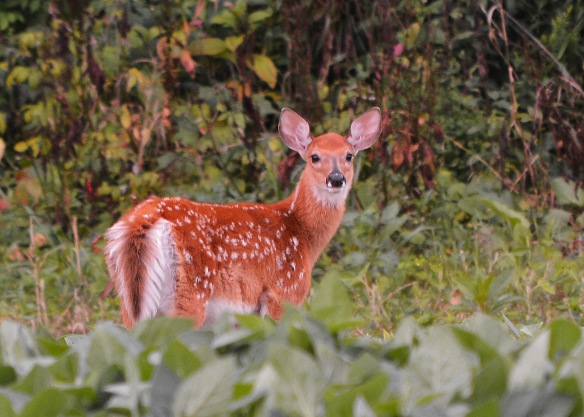 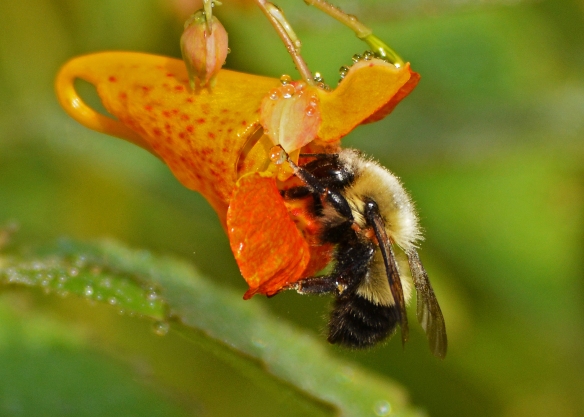 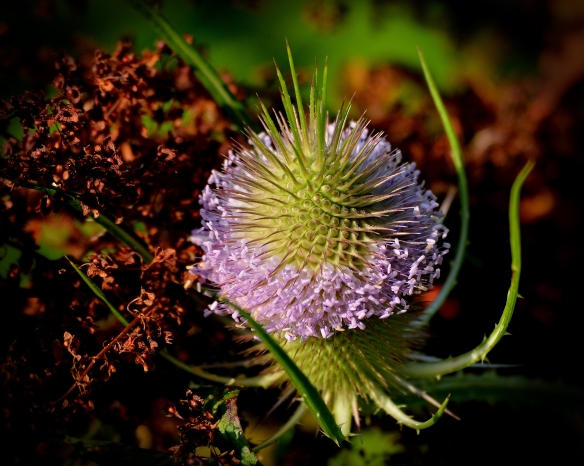 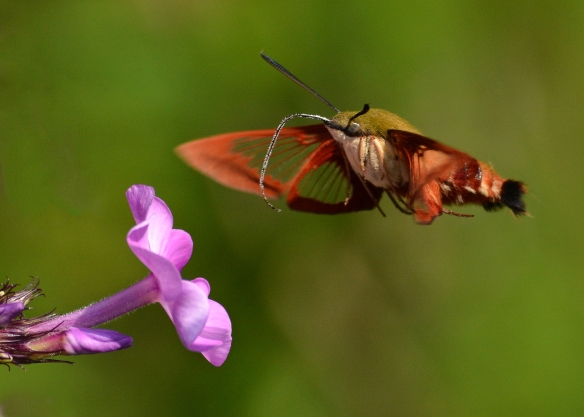 Clearwing Hummingbird Moth on Phlox (1 of 2) 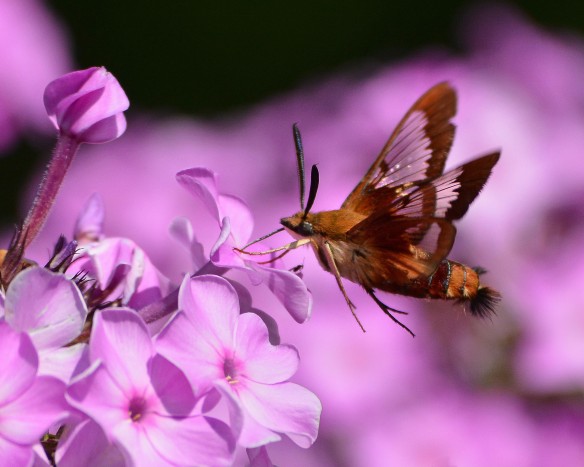 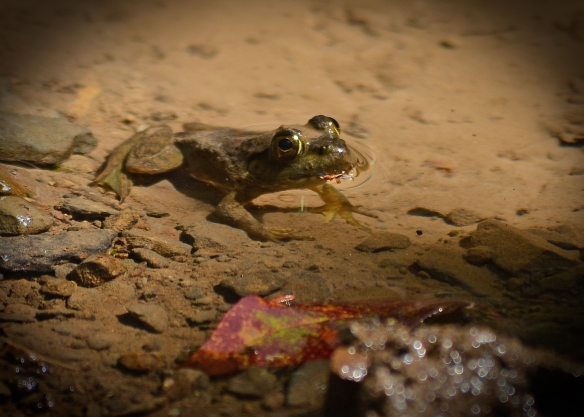 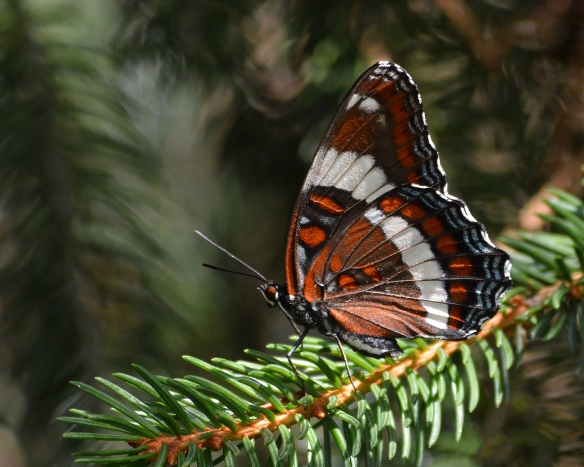 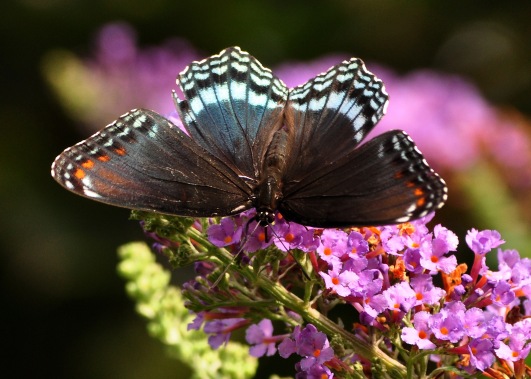 Yesterday I had a six-hour window to haul firewood from my woodlot to the house before a week of rainy weather would make the old wagon trail too soft for truck access. I had my camera on the front seat of the truck and allowed myself to get sidetracked a few times and capture a bit of the activity around me.

At this time of year, many of the wet, open places in my woodlot are dominated by a coarse, two- to five- foot tall herbaceous plant called Hellebore. (Veratum viride). It has a sturdy stalk and huge leaves but the terminal flower clusters aren’t much to look at. They’re small, yellow-green flowers that rarely seem to attract a lot of insects. Yesterday was an exception: I spotted a White Admiral butterfly working the flowers on a patch of Hellebore next to my work area and captured the moment. 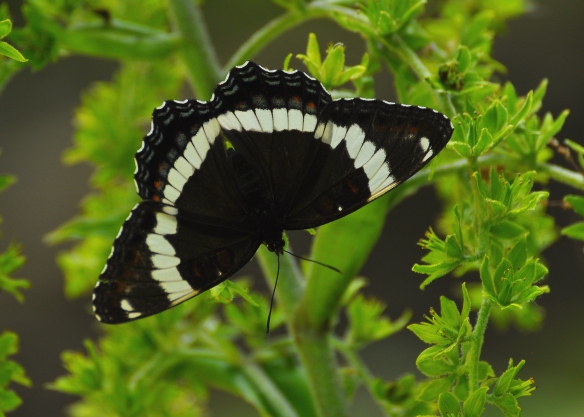 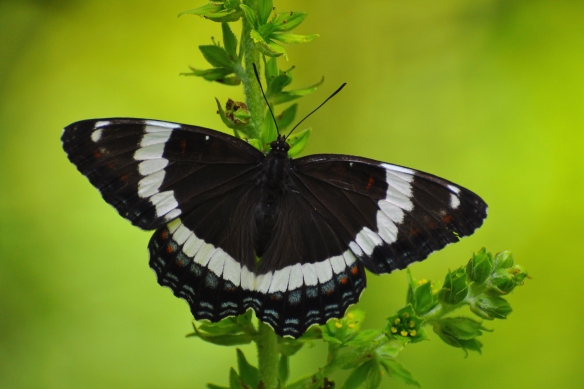 When turning my truck around in a damp, weedy opening, I happened to notice movement just beyond the front wheel. I had disturbed a Wood Frog (Rana sylvatica), which leaped up from the wet ground cover, landed on a stump and posed briefly for a photo. This amphibian, common in the U.S. and Canada, is easily identified by its dark mask (a “robber’s mask”). Most of my close encounters with Wood Frogs occur in early spring, when they create quite a spectacle, moving to vernal pools as soon as the ice is gone to call, breed and lay eggs. 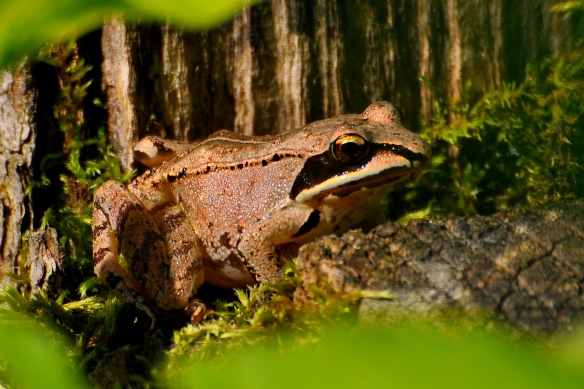 The humid, 90-degree weather took its toll – coming down the hill to the house with my 5th load of wood, I was desperately in need of a diversion. I walked into a brushy field, hoping to catch a glimpse of the Great Crested Flycatchers feeding their young, but instead found a Song Sparrow (Melospiza melodia) perched in a Balsam Fir tree, singing. Just the break I needed! 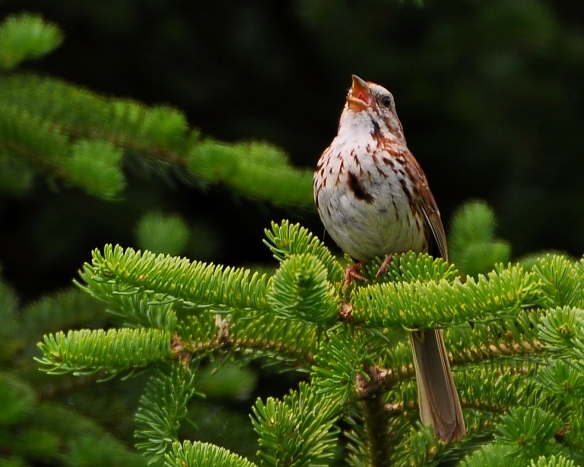