It seems everyone knows about killdeer. They’re a shorebird that can be seen without going to the shore! Killdeer are common and widespread, adapted to a variety of human habitats, and noisy! They frequent wet places – mudflats, puddles, flooded fields and shorelines. But, unlike other shorebirds, they are very much at home “wading” in the short grass of grazed pastures, athletic fields, golf courses and similar terrestrial habitats.

A friend called in mid May to tell me about killdeer nesting on his farm. He had discovered one  family of newly hatched chicks near a muddy farm lane and pasture. A second nest site, with an adult still on the nest, was found in the corn stubble of a nearby field.

When we visited the site where the brood of four chicks was last seen, the empty nest was the first point of interest. Nothing more than a slight depression lined with a bit of dried plant residue, it had served its purpose and was already disappearing into the landscape.

The behavior of the parents – noisy and feigning injury – told us the day-old chicks were close, hiding in the grass and weeds. One parent fluttered in the opposite direction, exhibiting the classic “broken-wing” display in order to divert our attention and draw us away from her helpless chicks. She was very convincing and we played along to avoid unnecessary disturbance. I photographed her as we left. 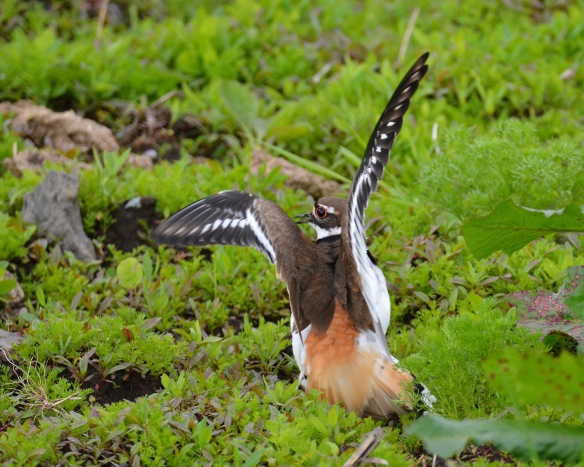 At the second nest site in the field of corn stubble, the adult was sitting on eggs that we assumed were near the end of their 25-day incubation period. Turns out, there were four eggs and they would hatch before our next visit. 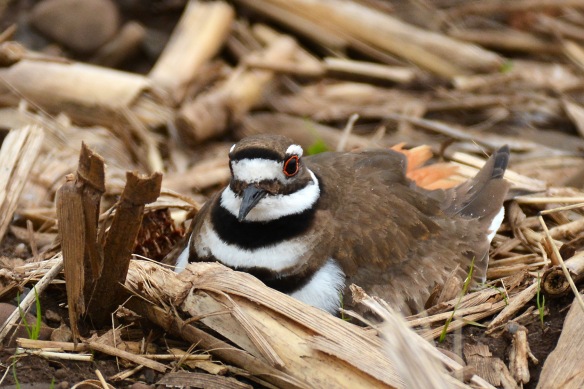 Five days later, it was time to cultivate the corn field. Fortunately, the chicks had hatched and were mobile, able to scurry around and avoid a photographer as well as tractors. The downy little golf balls with disproportionately long legs and big feet were captivating to say the least. 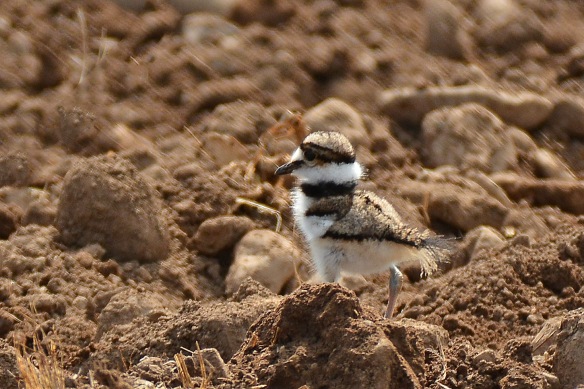 I was relieved to see the entire family a few days later, foraging in a secure micro-habitat at the edge of the cultivated field. Large puddles and a strip of dense grass and weeds was now home for the brood of four chicks.

Although the fluffy little chicks lacked the wings, tail and double neck band of their parents, their posture and foraging behavior mimicked that of adults.

The parents were never too far away and always on guard, even when grooming! I sometimes lost sight of them, but the arrival of a threat brought an immediate aerial attack. I saw this first hand when a grackle flew in to forage near the chicks. It was attacked and driven away before it s feet touched the ground. 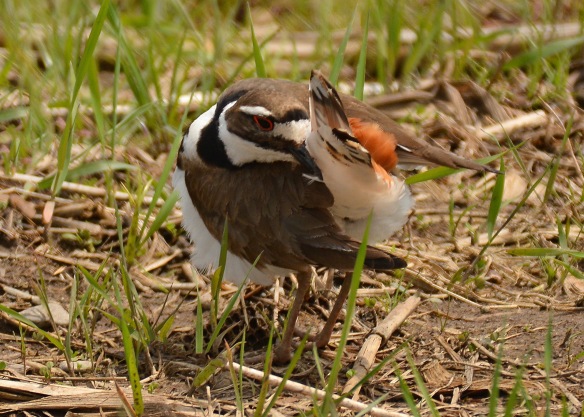 Having a hummingbird feeder suspended in front of a kitchen window, adjacent to a sand cherry perch, affords an opportunity to observe and photograph the nuances of daily behavior that might not be possible in a more natural setting. Despite the many obstacles to quality images – the haze and imperfections of glass in small windows, undesirable background elements, the ever-present contrast of sunlight and shadows – I sometimes shoot scenes just to capture the fascinating behavior that results from several hummers visiting the same feeder.

We see males and females throughout the day, probably two mated pairs. 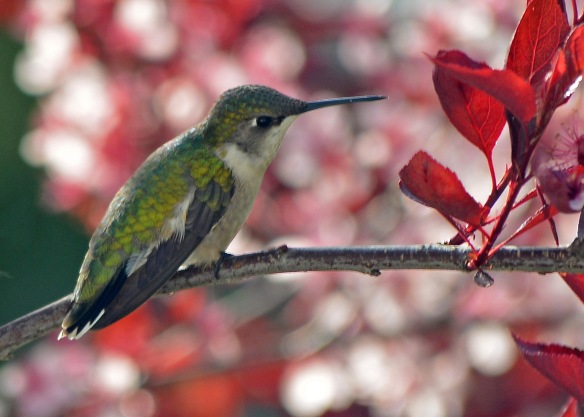 The typical sighting is a single bird, male or female, at the feeder at any one time. On this occasion (2 images), a female was on the back side of the feeder when a second female arrived. There was obvious tension in the air, as the feeding bird stared menacingly while the incoming hummer put on the brakes and hovered, not sure whether to feed, fight, or fly. 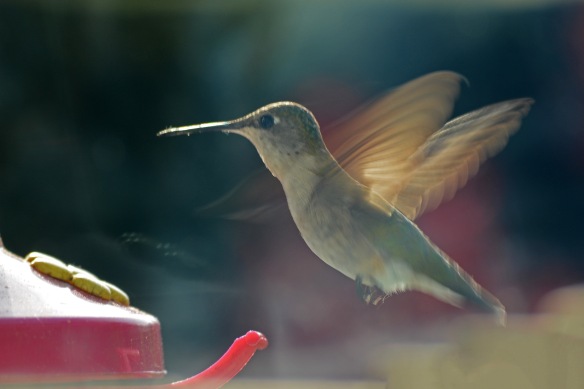 Unlike the females, males are notorious for their aggressive defense of feeders and flowers. There is a feisty little male in our group, and he has an abundance of attitude. He defends the feeder aggressively, often poised for combat until it’s too dark to see him. When perched near the feeder, his head is on a swivel, looking in all directions for an intruder. Should one show up, a spectacular chase ensues and, in the blink of an eye, the feeder is ours again. 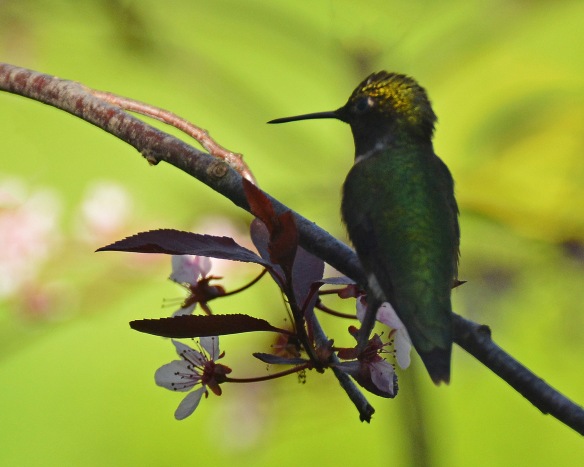 The National Wildlife Federation has promoted the creation of sustainable wildlife habitat for as long as I can remember. It maintains that “Anyone can create a welcoming haven for local wildlife”. The scope of this mission is broad – residential properties, institutional grounds, urban green spaces, etc. – and the support is equally impressive. Programs include gardening for wildlife (including butterflies and bees), the certification of wildlife habitat, education, current events and photo contests.

The rewards of wildlife habitat enhancement are evident throughout the year, but never more so than during the peak spring migration in May. Songbirds in myriad shapes, sizes and colors are on the move. Some are passing through, perhaps offering no more than a glimpse, while others are settling in on summer range. In either case, the birds need places to rest, feed, shelter — habitat!

Visitors to habitats around a home present opportunities for viewing and photographing that are virtually impossible at other times of the year for many species. This post is an example. Overall, the habitat includes mature trees, shrubs, herbaceous vegetation, water and feeders. The micro habitat for most of the images is a purple-leaf sand cherry and bird feeders next to the house. The sand cherry, a shrubby tree, provides valuable perching habitat and convenient access to feeders. 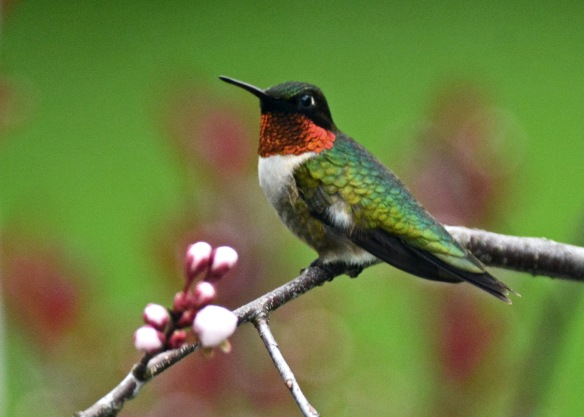 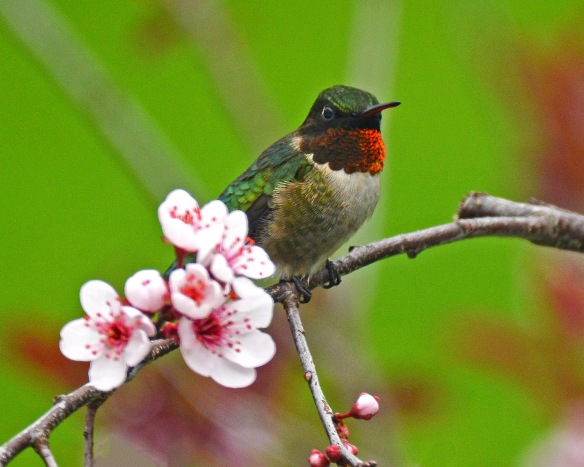 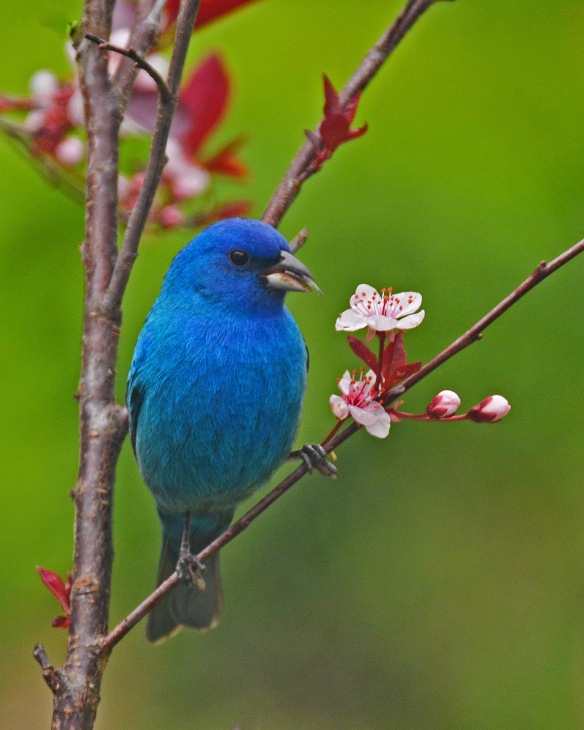 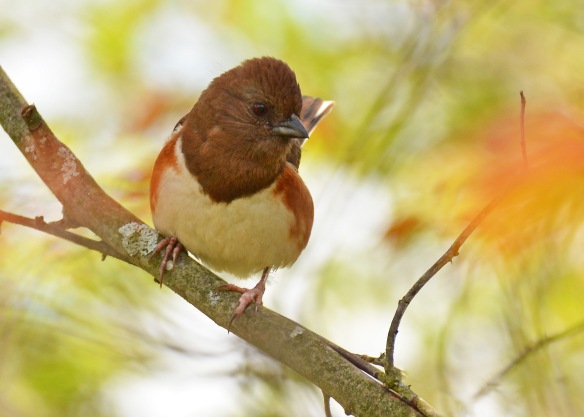 Female Eastern Towhee laying claim to a nesting territory (May 15, 2019)

Backyard habitats come alive with the songs and colors of migrating birds in May, but a large flock of goldfinches swarming nyjer seed feeders throughout the day tends to dominate the immediate landscape. Goldfinches in their brilliant breeding plumage appear to glow in the poor light of rainy days. By the 14th consecutive day of rain, the radiance of 20 busy finches is most welcome! 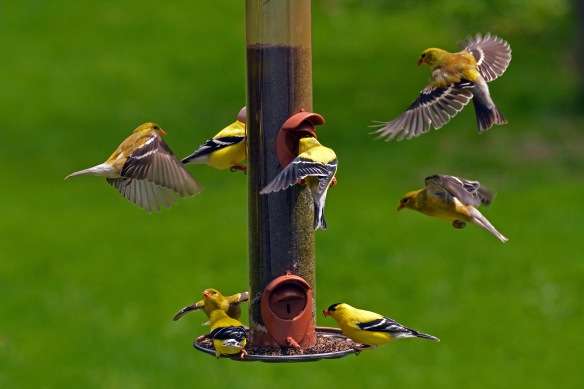 At peak feeding times, there are many more birds than feeding stations and the chaotic activity has the look of a large number of humming birds at a sugar-water feeder. Some birds resort to feeding on spilled seed on the ground while others battle for position at the primary source. It’s a game of musical perches, and it seems everyone gains access to food at one point or another. 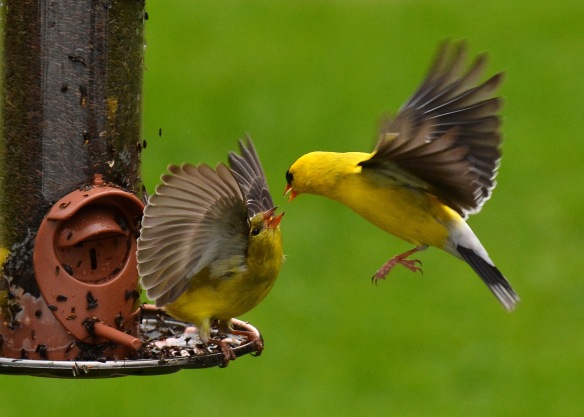 A shrubby tree like ornamental sand cherry adds critical, backyard habitat for foraging songbirds. It fills the need for strategic perches, which, in turn, provide stationary subjects for observation and photography. In this story, the background is mostly the partially opened flower buds of sand cherry, several days ahead of full bloom. 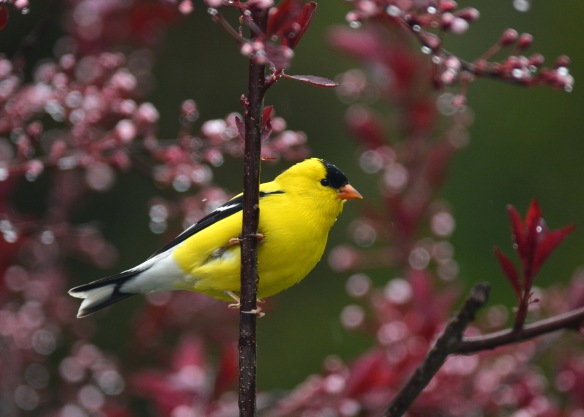 Occasionally, a member of the flock looks a little odd, with yellow breeding plumage interrupted with gray-green patches. These birds haven’t completed their spring molt.

Females have their own dress code, appearing in yellowish-olive garb rather than the gaudy yellow of males.

I’ll see some of these finches again in the summer, as breeding pairs in natural habitats. Then, they’ll be darting over weedy fields and brush lots, easily identified by their unique song and undulating flight pattern. They’ll be foraging on the tufted seeds of milkweeds and thistles and using the soft, fluffy tufts from the seed to line their nests.

A red fox vixen and her pups at their primary den site. Like mothers everywhere, she has her hands full!

A natural landscape – one with a chemical-free lawn, stone walls, brush piles and weedy edges – provides habitat for a surprising array of wildlife species. Add bird feeders to the mix and the response from seed-eating animals can be overwhelming. The Eastern Chipmunk is one such critter. Stone walls become condos and dirt-free entrances to burrows, tunnel systems and nesting chambers seem to appear overnight.

Despite decades of observing chipmunks underfoot, I was unfamiliar with nest-building  behavior until April of this year. A chipmunk popped up from a tunnel entrance in the lawn, checked for threats, then scurried a few feet and picked up a dried oak leaf that had persisted through the winter. 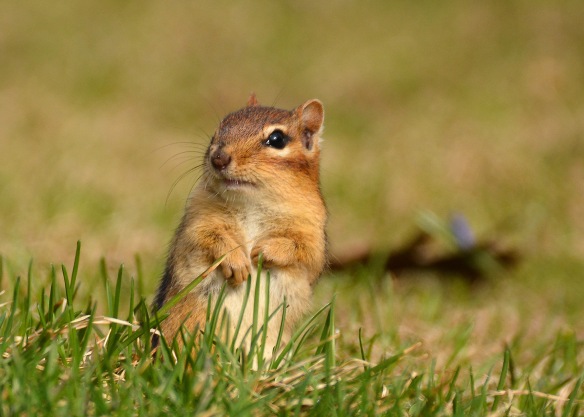 Ok – now what? That leaf is difficult to carry and too big for the tunnel. Of course – chew it up and use the cheek pouches for storage and transport!

The oak leaf project was repeated over and over again. The shredded leaves appeared to be the primary nest-building material and I assumed the work would be done when the last shredded leaf made its way into the tunnel. 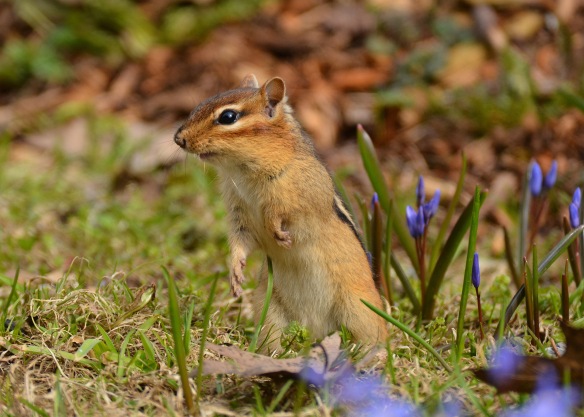 I was wrong. Should have known. Shredded oak leaves aren’t all that warm and cozy. The nest needed a liner, and the solution was soft, dried grass, literally plucked from the lawn.

Chippy spent the best part of a morning hauling leaves and grass into its hidden, underground chamber and constructing a nest….in the dark! That was several weeks ago, so I imagine the hard work is now paying dividends.